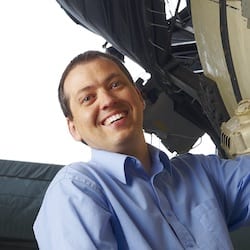 Christian Marois has been dreaming of planets outside the Solar system since he was a child. His passion led him to a career in astronomy. Dr. Marois' area of expertise is the direct imaging of exoplanets, or the process of taking pictures of nearby stars to search for the faint glow of orbiting planets. During his graduate studies, he invented the angular differential imaging (ADI); an observing method that allows an impressive gain of up to two orders of magnitude. His most significant science discovery to date is the imaging discovery of the first multi-planet system HR 8799 in 2008 at the Gemini North and Keck observatories. Dr. Marois won many awards, including the American Association for the Advancement of Science's Newcomb-Cleveland prize, the Natural Sciences and Engineering Research Council of Canada's Polanyi award, the Plaskett medal, the Quebec National Assembly medal of honour, and was named scientist of the year by Radio-Canada. He is a member of the Royal Society of Canada's College of New Scholars since 2014. Dr. Marois is leading state-of-the-art experiments at the National Research Council of Canada's NEW EARTH laboratory and with his team, is testing new technologies to allow the search for Earth-like planets. Photo Credit: Erich Saide