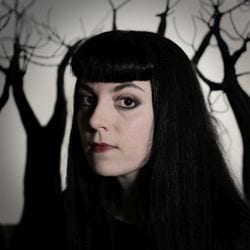 Christiane Cegavske grew up among the dark firs and gnarly oaks beside the Umpqua River in Oregon, escaping at the tender age of 17 to study painting and animation at San Francisco Art Institute where she earned a Bachelor of Fine Arts degree in painting. The influence of the natural woodland environment and the animals who live within have left a permanent mark upon her creative life that endures even as her career path placed her in urban environments.

She is best known for her first stop-motion animated feature film, the award-winning Blood Tea and Red String. Completed in 2005, this film has had 47 official screenings in festivals, theaters, and galleries in 14 cities across the United States and Canada and in more than 20 additional countries. It has received excellent reviews in the press, including The New York Times, The New York Post, and Variety, where Dennis Harvey described the film as, “a David Lynchean fever dream on Beatrix Potter terrain.” Currently represented by Adler and Associates, the film is available in over a dozen countries. The characters in the dialogue-free puppet animation are anthropomorphic woodland animals whose lifestyle is informed by their creatureliness combined with their trappings of humanity, the animal skin serving as a vehicle to explore human nature from a safe distance.

Cegavske’s second feature-length stop-motion puppet animation, Seed in the Sand, is currently in production. The film’s main characters are furry, beaked creatures who embrace their birdish, rodent-like nature in the way they live in nests built in trees. Their human side is expressed through the depth of their personal interactions, emotive singing, complicated ritual, and the pottery they make to store their food. The Guggenheim Fellowship will support key elements of this production, especially the creation of music and sound.

While working on her own film projects, Cegavske has also engaged in a freelance career as an animator and sculptor for television and film from 1999 to the present, working on projects for NBC, The Oxygen Network, VH1, the Disney Channel and Fox at Space Bass Films and Acme Filmworks in Los Angeles, as well as a variety of projects with Bent Image Lab in Portland, Oregon, and animated dream sequences for Asia Argento’s film, The Heart is Deceitful Above All Things.

In 2014 Cegavske transitioned to teaching and is currently in her fifth year as an Assistant Professor in the Animation Department at Kansas City Art Institute, where some of her most rewarding experiences come from encouraging the development of students as they grow into effective and engaged members of the art community.

She recently completed a new body of paintings and sculpture which were shown at Art Queen Gallery in Joshua Tree, California, September through October 2018, and is working on another collection of sculpture and painting for her July 2020 show at Lisa Derrick Fine Arts in Los Angeles, California.

Fluent in many artistic mediums, I am primarily focused on stop-motion animation, which encompasses a wide range of expression through a variety of materials and techniques to create a compelling moving image. The tactile intimacy of making puppet-based stop-motion animation enchants me—the clay and fibers, the wire and glue, making with my hands all that I imagine to exist in a self-created world brought to life frame by frame. The heart of my work lies somewhere between fable and fever dream where anthropomorphic creatures follow their own illogically logical pursuits and mysterious actions have dire consequences.

Characters who live through my art come to me in unguarded moments, finding their way into sketches and journal writings. Those who can speak for the silent parts of my experience come back again and again to stand as symbols encoding my personal history, drawing the thread of a story into the tangled interior forest. All of my artwork contains some level of autobiographical content masked by the invented reality. I am creating a personal myth using signs and symbols, both deeply personal and anchored in our cultural collective imagination. In creating my individual mythic landscape, I follow dream logic and flashes of inspiration along with themes influenced by my research into the mythology of cultures worldwide, the archetypes of Jungian psychology, and the pre-Grimm versions of our familiar fairy tales.

Seed in the Sand Teaser
Blood Tea and Red String