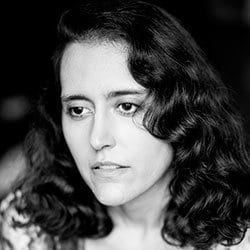 Christina Masciotti has been described as a playwright with a “distinctive gift” by Ben Brantley of The New York Times, and as “our heir to Moliere” by theater critic Helen Shaw. In writing about seemingly unremarkable characters punished by life and searching for redemption – from a retired pretzel factory worker exploited by her landlord, to a Greek immigrant flattened by divorce, to a Puerto Rican shoe salesman bewildered by a custody battle – Ms. Masciotti magnifies the heroic dimensions of their grace and conviction. Line by line, she features the avant-garde accidents of everyday speech, the unintentional misspeaking, the stirring individuality, as well as the sometimes strange and unexpected beauty that emerges from the wreckage. By not polishing off the authentic warps and cracks of spoken language, she allows the audience raw access to the curious vulnerabilities we all share. Her motive is to delve without scorn into the lives of uprooted outsiders, and open up a vein of feeling for people who may be wholly at odds with how we see ourselves.

Selected as one of four “Faces to Watch” by The New York Times (2015), Ms. Masciotti has been honored as a Berks County Community Foundation SPA Fund Fellow, a multiple-year finalist for the Princess Grace Award, a semi-finalist for the O’Neill National Playwrights Conference and the Stanley Award for Drama. She has been nominated for the Susan Smith Blackburn Award, the Barrie and Bernice Stavis Award, and the Doric Wilson Independent Theater Award.