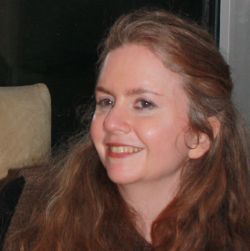 Christina Pugh is the author of four books of poems: Perception (forthcoming from Four Way Books in 2017), Grains of the Voice (Northwestern University Press, 2013), Restoration (Northwestern University Press, 2008), and Rotary (Word Press, 2004), in addition to the chapbook Gardening at Dusk (Wells College Press, 2002). Her poems have appeared in The Atlantic Monthly, Poetry, TriQuarterly, Ploughshares, The Kenyon Review, and other periodicals; and in anthologies such as Poetry 180 (Random House, 2003). Her honors have included the Word Press First Book Prize (for Rotary), the Ruth Lilly Poetry Fellowship from Poetry magazine, the Lucille Medwick Memorial Award from the Poetry Society of America, an individual artist fellowship in poetry from the Illinois Arts Council, the Associated Writing Programs’ Intro Journals Award, the Grolier Poetry Prize, and residencies at Ragdale, Ucross, and the Virginia Center for the Creative Arts.

In addition to her own poetry, Pugh publishes literary criticism. Her interests lie in the poetics of ekphrasis (poems treating visual art), various aspects of poetic form and meter, the lyric poem as a genre, and manuscript scholarship treating the work of Emily Dickinson. Her articles have appeared in Poetry, The Emily Dickinson Journal, Literary Imagination, and The Cambridge Companion to American Poetry Since 1945 (Cambridge University Press, 2013), among others.

Pugh is Professor of English at the University of Illinois at Chicago, where she teaches in the Program for Writers (UIC’s doctoral program in creative writing). At UIC, she has received awards for teaching and graduate student mentoring, in addition to a faculty fellowship at the university’s Institute for the Humanities. She is also consulting editor for Poetry magazine, where she has worked in an editorial capacity since 2004.

During her year as a Guggenheim fellow, Pugh will be completing a book titled Stardust Media: a collection of poems that converse with technologies both ancient and electronic.