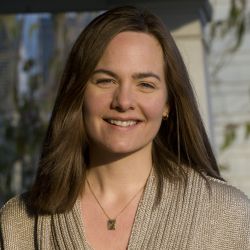 Dr. Christine Montross is Assistant Professor of Psychiatry and Human Behavior at Brown University and a prize-winning poet with an M.F.A. in Creative Writing from the University of Michigan. She is also a practicing inpatient psychiatrist. Dr. Montross began writing literary nonfiction in medical school and her subsequent first book, Body of Work: Meditations on Mortality from the Human Anatomy Lab, was named an Editor’s Choice by The New York Times and one of the Washington Post’s best nonfiction books of 2007. Her second book, Falling Into the Fire: A Psychiatrist’s Encounters with the Mind in Crisis, was named a New Yorker Book to Watch Out For, and was described by The New York Times as “A moving and nuanced picture of the psychiatric patient and doctor relationship, and a riveting and thought-provoking look at mental health care.” Dr. Montross’s writing is often singled out for the way she examines difficult topics—from death to psychiatric illness—with lyricism and beauty. Her work has been recognized with a MacColl Johnson fellowship in Poetry, and the Eugene and Marilyn Glick Emerging Indiana Authors Award. Her manuscript Embouchure was a finalist for the National Poetry Series. While at Michigan she received the Meader Family Prize in the Hopwood Awards and a Cowden Fellowship. She has also written for many national publications and has most recently sparked national debate with Op Ed pieces about mental health care in The New York Times. During the term of her Guggenheim Fellowship, Dr. Montross will work on a new book about the confluence of mental illness and the criminal justice system tentatively titled Acquainted with the Night.