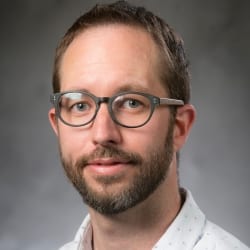 Christopher Bail is the Douglas and Ellen Lowey Associate Professor of Sociology and Public Policy at Duke University. He is an expert in political polarization, culture, and violent extremism and a leader in the nascent field of computational social science. His research examines how non-profit organizations and other political actors shape public opinion about controversial issues by analyzing large groups of texts from social media sites such as Facebook and Twitter, newspapers, and television transcripts.

Bail’s first book, Terrified (Princeton University Press, 2018), explains how fringe ideas became mainstream in U.S. politics in recent years via a large-scale analysis of public discussions about Islam. His other research has been published in leading publications such as the Proceedings of the National Academy of Sciences, the American Journal of Public Health, and the American Sociological Review. In 2017, he was one of 30 academics recognized by a prestigious Andrew Carnegie Fellowship for his work on political polarization and violent extremism. His work has also been recognized by awards from the Association for Research on Non-Profit Organizations and Voluntary Action, the American Sociological Association, the Society for the Scientific Study of Religion, and the Society for Study of Social Problems. His research has been supported by the National Science Foundation, the Robert Wood Johnson Foundation, the Russell Sage Foundation, the Alfred P. Sloan Foundation, and the National Institutes of Health. His work has also been covered by major media outlets such as NBC News, National Public Radio, and the Washington Post.

During his year as a Guggenheim Fellow, Bail will work on a book about political polarization based on a large field experiment designed to disrupt social media echo chambers on Twitter that combines survey data, text analysis, and in-depth interviews with hundreds of Republicans and Democrats in the United States.