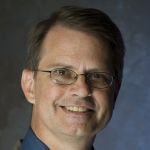 Chuck Owen is Distinguished University Professor of Jazz Studies at the University of South Florida where he also serves as the founding Director of the USF Center for Jazz Composition. A committed, visible, and passionate educator, he is also recognized, inside and outside of academia, for his unique compositional voice. Grounded in the jazz tradition, Mr. Owen does not hesitate to mask a diverse array of musical influences–ranging from classical and world musics to hip-hop/funk, folk, and even country (and western!). The result is a thoughtful, frequently playful, body of work that seems to celebrate the American spirit.

Chuck Owen’s primary creative outlet is the Jazz Surge, a collection of some of Florida’s finest professional jazz musicians. In addition to founding the 18-piece ensemble in 1995, Owen conducted, composed, and/or arranged all of the music on their first three CDs, which featured guest stints from the likes of John Abercrombie, Nat Adderley, Benny Golson, and Ingrid Jensen, among others. These recordings served to introduce the ensemble and Mr. Owen to an international audience, garnering critical attention as well as prominent radio play. JazzTimes critic David Franklin included their first release on his list of the five best jazz CDs of 1996. The Surge has since performed at a wide range of festivals, conferences, and clubs, serving, since 2005, as the resident orchestra for Central Florida’s Jazz Masterworks Series and the International Jazz Composer’s Symposium. These events, produced/conducted by Chuck Owen in conjunction with the USF Center for Jazz Composition (CJC), have resulted in a steady stream of performances with noted jazz composers, including Bob Brookmeyer, John Clayton, Chick Corea, Dave Douglas, Slide Hampton, Bill Holman, Jim McNeely, Bob Mintzer, Gerald Wilson, and many others.

The Surge’s most recent recording, slated for an August ’09 debut, is a slight departure as it celebrates the life and compositional output of the late Michael Brecker. An outgrowth of Chuck Owen’s vision for the CJC, this project re-envisions Brecker’s compositions through the eyes of various arrangers, including frequent Brecker collaborators Gil Goldstein & Vince Mendoza, Vancouver composer Fred Stride (winner of the CJC’s International Jazz Arranging Competition), and, of course, Chuck Owen himself. Joining the Surge are a host of special guests (Randy Brecker, Dave Liebman, Joe Lovano, Mike Mainieri, Adam Nussbaum, and Mike Stern), all of whom shared the bandstand on numerous occasions with Brecker.

In addition to his work with Surge, Mr. Owen has undertaken a fairly diverse body of commissions and projects. Collaborations with the Netherlands’ Metropole Orchestra, the U.S. Army Jazz Ambassadors, Confluences, and tenor saxophonist Jack Wilkins have all resulted in contributions to recent recordings. Other performances include the Smithsonian Jazz Masterworks Orchestra, the Tonight Show Orchestra, and the Cincinnati Symphony Pops Orchestra, among others. Mr. Owen is the recipient of the prestigious 2000 IAJE/ASCAP commission in honor of Louis Armstrong and two Florida DCA Individual Artist Fellowships. He has over fifty published compositions for jazz ensemble and is a frequent guest artist and clinician at universities throughout the country.

Chuck Owen has been honored with several awards for teaching, including a “President’s Award for Faculty Excellence” in 2003. He has served as President of the International Association for Jazz Education as well as a National Academy of Recording Arts & Sciences “governor” for the Florida Chapter. A graduate of California State University, Northridge, and the University of North Texas, he is the author of several articles and routinely reviewed new music for the Jazz Educators Journal.