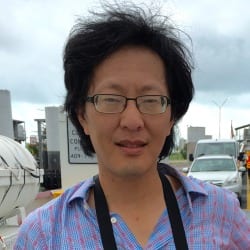 Cin-Ty Lee is a professor of geochemistry at Rice University in Houston, Texas, where he is now department chair. He received his Bachelor’s degree from the University of California, Berkeley in geology and his PhD from Harvard University in geochemistry. He was a post-doctoral fellow at the California Institute of Technology. He studies the compositions of rocks to reconstruct how Earth’s interior, surface, atmosphere and life have evolved through time. Specifically, his interests lie in understanding how mountains and continents form, how the Earth’s deep interior has differentiated, and how deep Earth processes modulate long-term climate and Earth’s habitability. He has published over 100 papers on topics ranging from whole Earth carbon cycling, rise of atmospheric oxygen, formation of ore deposits, coupling between magmatism and erosion, temperature of the Earth’s mantle, and the origin of granites. For the Guggenheim, he will be investigating how and when continents emerged from the oceans and the effect of emergence on the evolution of whole Earth cycling of life-giving nutrients. He will also be exploring his new interests in crystal growth and kinetics in magmatic and hydrothermal conditions. He is a fellow of the Mineralogical Society of America and the Geological Society of America and has been awarded the Kuno Medal from the American Geophysical Union, the Clarke Medal from the Geochemical Society, the Donath Medal from the Geological Society of America and the Packard Fellowship. He was a Mineralogical Society of America Distinguished Lecturer, the Shen-Su Sun Lecturer of the Chinese Geochemistry Society, the Agassiz Lecturer (Harvard) and the Mutch Lecturer (Brown University). He has been a Miller Visiting Professor at UC Berkeley and a visiting professor at the University of Tokyo and the Academic Sinica in Taiwan.

Lee is an avid birder, spending much of his spare time in search of birds around the world and painting birds and other natural history subjects in his home studio. He has published numerous articles on field identification of such difficult complexes as Arctic and Pacific Loons, female orioles, American and Siberian Pipits, and dowitchers. He is currently working on a new guide to the identification of Empidonax flycatchers. He donates his paintings and his time in teaching courses and leading field trips for conservation-oriented non-profit organizations and local schools.