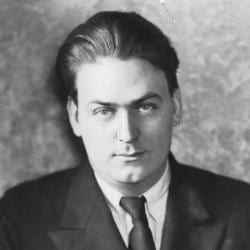 THROCKMORTON, CLEON:  Appointed for a study of certain historical theatres of Europe, as well as of modern productions, chiefly on the architectural and mechanical sides, with the purpose of gathering material for a work on the simplification of theatrical production; tenure, twelve months from June 1, 1935.

Publications: Born in a Beer Garden, 1929 (with Christopher Morley); Catalog of the Theatre, 1932.