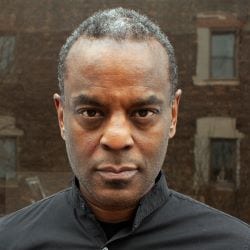 Clifford Owens is an artist who makes photographs, performance art, works on paper, videos, installations, and texts. His art has appeared in many solo and group exhibitions, both nationally and internationally. Owens' solo museum exhibitions include Anthology at MoMA PS1, Better the Rebel You Know at Home in Manchester, England, and Perspectives 173: Clifford Owens at the Contemporary Arts Museum Houston; and group exhibitions featuring his work include Freestyle, Greater New York 2005, and Performance Now: The First Decade of the New Century. His performance-based projects have been widely presented in museums and galleries, including the Museum of Modern Art, the Baltimore Museum of Art, and the Brooklyn Academy of Music. Owens was born in Baltimore, Maryland. He lives and works in New York City. Photo Credit: Karina Aguilera Skvirsky