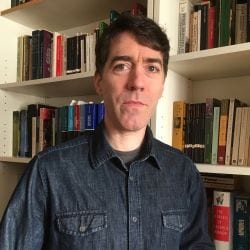 Colin Gee trained as an actor at École Jacques Lecoq in Paris and the Dell’ Arte School of Physical Theater in California. His minutely constructed performances focus on descriptive movement and evoke narrative and emotional states by subtle physical motions. Writing for the New York Times, Roslyn Sulcas wrote of his work: “With the curve of an arm, the twitch of a finger, the slight shift of a foot Mr. Gee can suggest infinite possibilities of physical language, intimate the subtleties of human feeling.”

He began dancing in 1999 with the Iréne Hultman Dance Company, performed as a clown with Cirque du Soleil from 2001 to 2004, and in 2009 was named the founding Whitney Live artist-in-residence at the Whitney Museum of American Art. Recipient of a 2011 EMPAC Dance Movies Commission and a 2012 Rome Prize, he has received commissions from SFMOMA and the Whitney Museum. His performance works have premiered in New York at PS122, DTW (video), the Chocolate Factory, and Abrons Arts Center. Since 2007 he has collaborated with Angie Smalis in Ireland on dance works including “Madeline” (2018), “John’s Query” (2017), and “Lenore” (2016).