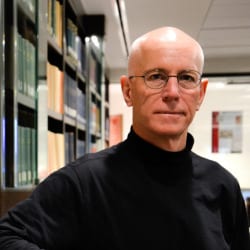 Columba Stewart OSB is a Benedictine monk of Saint John’s Abbey in Collegeville, Minnesota. A native of Houston, he studied at Harvard College and Yale University before entering the monastery in 1981. After his final vows he earned a doctorate in Theology at the University of Oxford, writing on early Christian asceticism as described in Syriac and Greek texts. In books and articles he has focused on the transmission of monastic ideology across cultural and linguistic frontiers, such as Syriac influences on Greek ascetic thought, the later Syriac reception and translation of Greek monastic literature, the Latin appropriation of eastern monastic concepts, and the Greek adaptation of Latin monastic literature. Other studies have focused on the philosophical antecedents of Christian asceticism and early monastic understandings of contemplative prayer and biblical interpretation. The role of manuscripts in the transmission of key monastic texts has become an increasingly important aspect of his recent work.

Since 2003 he has been leading the effort of the Hill Museum & Manuscript Library (HMML) at Saint John’s University to digitize endangered manuscripts belonging to communities in Syria, Iraq, Turkey, Lebanon, the Old City of Jerusalem, India, Ethiopia, Mali, Egypt, and other locations. The work of HMML and Columba Stewart’s role in building relationships with these communities have been featured in major international media such as the Economist, the Wall Street Journal, National Public Radio, PBS, and several European television programs and documentaries. HMML’s collections and online tools for access and study of digitized Christian and Islamic manuscripts are becoming indispensable for many fields of research.

During his fellowship, Columba Stewart will be completing a new overview of the first millennium of Christian monasticism across several cultures, to be published by Oxford University Press as Between Earth and Heaven: Interpreting the First Thousand Years of Christian Monasticism.