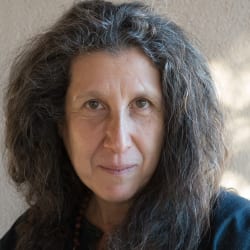 Cynthia Madansky is an award winning filmmaker and painter. Her films integrate hybrid forms of cinematic traditions including autobiography, experimental methodologies, cinema verité, scripted narrative, ethnographic observation as well as dance and performance. The work engages with cultural and political themes, such as identity, nationalism, the transgression of borders, displacement, nuclear arms and war, foregrounding the human experience and personal testimony. Using 16mm, super 8 and video, her films portray the consequences of politics on the daily lives of individuals, interrogating the concept of personal responsibility and national accountability.

Her recent work includes: 1+8, (120 min, HD, 2012) made in collaboration with Angelika Brudniak, a film and eight screen installation filmed in border towns of Turkey with Greece, Bulgaria, Georgia, Armenia, Nakhchivan/Azerbaijan, Iran, Iraq and Syria, showcasing through intimate portraits and cinematographic tropes the political and cultural dynamics of life on those frontiers; E42 (33 min, 16 mm, 2015) a visceral exploration of the EUR neighbourhood in Rome, a modernist landscape that was originally designated by Mussolini as the the site of the World Fair of 1942 as a celebration of the 20 year anniversary of Fascism; Anna Pina Teresa (7 min, 16 mm, 2015) filmed in Mussolini’s former fencing studio, examines the contemporary and historical dynamics between an urban fascist space and movements of resistance; Viva Agua (9 min, 16mm, 2015) a meditation on the philosophical work written by the Brazilian writer Clarice Lispector; ḤARĀM, (16mm, 47 min. 2017) an essay film that interrogates the current political landscape at the Haram Al-Sharif / Noble Sanctuary, located in the Old City of Jerusalem; Grace + Gravity an experimental dance film based on the texts of Simone Weil. She is currently working on ESFIR a film about Esfir Shub and her unrealised script about the status of women after the Bolshevik Revolution. The film ESFIR explores contemporary feminist movements in Russia inspired by Shub’s script.