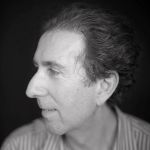 D.T. Max is a graduate of Harvard University and a staff writer at The New Yorker. His first book was The Family That Couldn't Sleep: A Medical Mystery. The book was at once a piece of science journalism and a point of entry to explore what it means to be sick in a well world. As Wallace Stevens wrote in “The Comedian As the Letter C,” “The natives of the rain are rainy men.” In 2012 Max published Every Love Story Is A Ghost Story: A Life of David Foster Wallace. Max sought to give Wallace's life and work its full due, to depict a secular saint in a compromised world. Michiko Kakutani in the New York Times included it as one of her Top Ten Books of the Year and the Times of London praised it as “tremendous, a supremely understated and magnificently comprehensive life of a remarkable writer.” Max lives in Montclair, New Jersey,  with his wife, their two young children, and a rescued beagle who came to them named Max. Profile photograph by Curt Richter