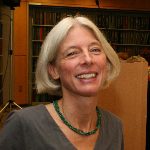 Dagmar Herzog is Distinguished Professor of History and the Daniel Rose Faculty Scholar at the Graduate Center, City University of New York. She has published widely in the history of religion in Europe and the U.S., on the Holocaust and its aftermath, and on the histories of gender and sexuality. She recently completed Sexuality in Europe: A Twentieth-Century History (Cambridge UP, 2011). She is also the author of Sex in Crisis: The New Sexual Revolution and the Future of American Politics (Basic, 2008), Sex after Fascism: Memory and Morality in Twentieth-Century Germany (Princeton UP, 2005), and Intimacy and Exclusion: Religious Politics in Pre-Revolutionary Baden (Princeton UP,1996; Transaction, 2007). She is the editor and coeditor of six anthologies, including, most recently, Brutality and Desire: War and Sexuality in Europe’s Twentieth Century (Palgrave Macmillan, 2009); and Lessons and Legacies VII: The Holocaust in International Perspective (Northwestern UP, 2007).

Prof. Herzog will be a Visiting Research Scholar at the Shelby Cullom Davis Center for Historical Studies at Princeton University in 2013, working with other scholars on the theme of "Belief and Unbelief," and she has also held positions as a Member in the School of Social Science at the Institute for Advanced Study and as a Mellon Faculty Fellow at Harvard University. Her research has been supported by the Ford Foundation, the American Council of Learned Societies, the Social Science Research Council, the German American Exchange Service (DAAD), and the National Endowment for the Humanities. She has worked as a columnist, covering American politics, for the Berlin-based tageszeitung, was recently appointed a member of the Board of Editors for the American Historical Review, and is currently at work on a new project on the European and American histories of psychoanalysis, trauma, and desire.

Follow this link to read Rorotoko's cover interview of April 9, with Dagmar Herzog, on her book Sexuality in Europe: A Twentieth-Century History.