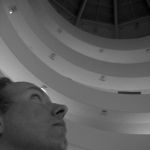 Dale A. Frail is an astronomer who is best known for his work on gamma-ray bursts but he is also the co-discoverer of the first extrasolar planets. He works on a wide variety of research problems in high-energy astrophysics, including pulsars, gamma-ray bursts, soft-gamma-ray repeaters, supernova remnants, and more. In his research, Frail uses observations from the entire electromagnetic spectrum, but his particular specialty is radio astronomy. He is the author of more than 215 peer-reviewed papers.
Frail received his bachelor's degree in physics from Acadia University in Nova Scotia, and his Ph.D. in astronomy from the University of Toronto. In 1989 he brought an NSERC Fellowship to the United States, and after completing a prized Jansky Postdoctoral Fellowship, he joined the National Radio Astronomy Observatory where he has remained for the last twenty years.

As a Guggenheim Fellow, Frail intends to intensify his research in the areas of pulsars, cosmology, and gamma ray bursts, taking advantage of some exciting new capabilities enabled by a new generation of astronomical facilities that are now coming on line.