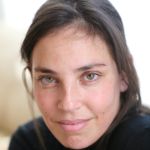 Danae Elon, an award-winning documentary producer, director, and cinematographer, grew up in Jerusalem and Italy, and today lives in Brooklyn, New York.

She graduated from with honors from NYU’s Tisch film school in 1995, winning awards such as the National Eastman Scholarship as well as her class award for Consistent Excellence in Cinematography. Her first documentary film, Never Again Forever, was released in 1996 and shown in more than twenty-five international film festivals. It received a Golden Spire award at the San Francisco International film festival and an achievement award from the Chicago International Film festival.

She returned to Jerusalem soon after to complete her next two films: Wild Mint, which she directed and produced, and Cut, which she photographed and co-produced with Nizar Hassan.

In 2001 Danae Elon retuned to the US. In the aftermath of the destruction of the Twin Towers, she began to work on her next film, Another Road Home, which received a Sundance grant in 2003. Another Road Home has been praised as one of the most honest and sensitive films ever made about the Israeli-Palestinian conflict. It premiered at the 2004 Tribeca Film Festival and was shown in more than twenty international film festivals, including IDFA, LAFF, Jerusalem Film Festival, Hot Docs, Encounters South Africa, Gotenburg, and many more. Another Road Home was theatrically released in 2005 and was showed in over fifteen US cities. It has been broadcast on the Sundance channel, BBC, both Al Jazeera and Israeli television, and on, among others, Finnish, Belgian, New Zealand, and Swedish television. The film has won two awards: a bronze medal at the Warsaw International Film Festival, and best documentary at the Tursak Film Festival in Istanbul. Her latest film, Partly Private, is her second feature documentary to have its world premiere at the Tribeca Film Festival, where it was honored as the best New York documentary.

She is currently working on her third feature documentary: The Evil Tongue, which takes as its theme the ancient Jewish law of Lashon Hara, or Evil Tongue. The work in progress was selected for presentation at the 2007 IFP market and recently received a Sundance production grant. The film will be released in 2010. In addition to her work as director and producer, Danae Elon has won awards for cinematography. She has worked in the U.S., Palestine, Israel, Mexico, Guatemala, Peru, and Nicaragua, both independently and for major networks.