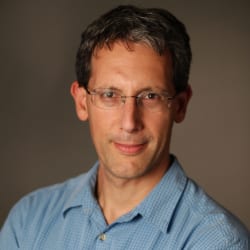 Daniel Lidar is a quantum scientist and engineer. He studies quantum information processing, with a particular focus on quantum computers. These computers are designed to operate at the nanoscale level and exploit the laws of quantum mechanics in order to perform computational feats that are known to stymie conventional computers.

Lidar is the holder of the Viterbi Professorship of Engineering at the University of Southern California, where he is also Professor of Chemistry and Physics.

He received his Ph.D. in Physics from the Hebrew University of Jerusalem before doing postdoctoral work at UC Berkeley. Prior to joining USC in 2005, he was a faculty member at the University of Toronto. At USC, Lidar is the Director of the USC Center for Quantum Information Science and Technology, and is the Scientific Director of the USC-Lockheed Martin Center for Quantum Computing.

Lidar’s Guggenheim project, Toward quantum advantages in computation via quantum annealing, will explore how a new generation of quantum computers that operate by keeping the computation close to the lowest energy state, might provide speedups or other computational advantages. Lidar is especially interested in identifying practical problems in the field of machine learning that such quantum computers can solve with a demonstrable advantage over conventional computers.

Lidar is an elected Fellow of the American Association for the Advancement of Science (AAAS), the American Physical Society (APS), and the Institute of Electrical and Electronics Engineers (IEEE). Among his other awards are an Alfred P. Sloan Fellowship and the Canadian Institute for Advanced Research Top 20 under 40 prize.