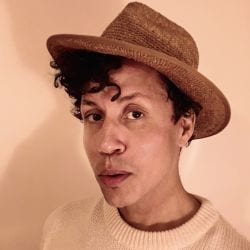 Jones explores ideas of the Afromystical (awakening an awareness of the numinous in the everyday through ritualized performance) in all his work. He has also been a pioneer in the exploration and articulation of identities and experiences that move beyond caging binaries and transcend limited civic, cultural, and political imaginings. Moved by silenced histories of sovereignty and agency, and emboldened by acts of survival and transcendence, Jones creates his own distinctive dramaturgy. For over twenty-five years of professional practice, Jones has demonstrated an unwavering commitment to the rigorous work of civic healing through vulnerable presence, truth telling, and collective critical engagement with possibility and radical imagination.

Jones was awarded a Doris Duke Artist Award, an Alpert Award in the Arts, a USA Artist Fellowship, an Arts Matters grant, an inaugural Creative Capital Grant, a McKnight National Residency and Commission, a Howard Foundation Fellowship, a NEA/TCG Playwriting Residency, a Jerome Fellowship, and a Many Voices Playwriting Fellowship. Jones was lead artist on five projects awarded support by the MAP Fund. Daniel has been a Mellon Creative Research Fellow at the University of Washington, a Hume Fellow at Occidental College, was a Fellow at the Hemispheric Institute at NYU, and has been in residence at a number of colleges and universities across the country. Jones received a Bistro Award for Outstanding Performance Artistry for Jomama Jones in 2019, and a Franky Award from the Prelude Festival in recognition of long-term, extraordinary impact on contemporary theatre and performance. Daniel lives in New York City where he is currently an Associate Professor at Fordham University.

Jomama Jones "See (Things As They Are)" from the forthcoming album, Anew