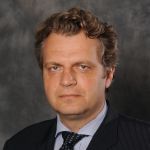 Daniel Diermeier is the IBM Professor of Regulation and Competitive Practice in the Department of Managerial Economics and Decision Sciences and the Director of the Ford Motor Company Center for Global Citizenship at the Kellogg School of Management. In addition, he holds faculty appointments at the Department of Political Science, the Department of Economics, the Department of Linguistics, and the School of Law, all at Northwestern University. Daniel is a member of the American Academy of Arts & Sciences and was named among the World’s 50 Best Business School Professors by Fortune magazine. He is the 2007 recipient of the Faculty Pioneer Award from the Aspen Institute named the “Oscar of Business Schools” by the Financial Times.  He is the Chairman and Co-Founder of the Northwestern Global Health Foundation, winner of the 2012 Chicago “Up-and-Comer” Innovation Award. His teaching and research focuses on political institutions, the interaction of business and politics, and crisis and reputation management. He has published two books, forty case studies, and over eighty research articles in academic journals mostly in the fields of economics, political science, and management, but also in other areas ranging from linguistics and psychology to computer science and applied mathematics. His most recent book, Reputation Rules: Strategies for Managing Your Company’s Most Valuable Asset, was published in 2011 and has been translated into Japanese, Mandarin, and Simplified Chinese. His research has been featured globally in media outlets such as the Wall Street Journal, Economist, Business Week, Financial Times, Fortune, and New York Times. He has won thirteen teaching awards, including the 2001 Kellogg Lavengood Professor of the Year Award and the 2013 Kellogg Alumni Professor of the Year award. He is a research fellow at the Canadian Institute of Advanced Research (CIFAR) and a member of the Economic Club of Chicago.