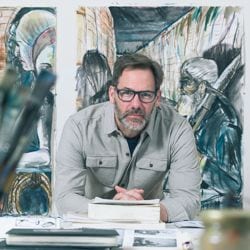 For 20 years, Daniel Duford has woven visual narratives — stories that flow through large paintings, graphic novels, and figurative sculpture. The trilogy, Radio Relay Towers is born from the mythic and political history of North America. The first part takes form in The Naked Boy, a birth of the nation graphic novel. Like the title character, the graphic novel The Naked Boy metamorphasizes into new forms — as museum installations of print work and terra-cotta sculptures. This work garnered Duford the 2010 Hallie Ford Fellowship through the Ford Family Foundation, and an exhibition at Atlanta Center for Contemporary Art. The second part of the trilogy, Sleeping Giant started as a gallery installation at The Art Gym at Marylhurst University that mined Duford’s own roots of New England mill towns. The drawings on gallery walls and on sculptural houses then transformed through collaboration with choreographer Lawrence Goldhuber and composer Mark Orton. The performance Sleeping Giant premiered at MASS MoCA in 2008 and traveled to Henry Street Settlement in New York. The Green Man of Portland completes the trilogy and brings an invented legend to the downtown streets of Duford’s adopted home, Portland, Oregon. A street comic, The Legend of the Green Man covers ten city block through drawn historical placards and two monumental sculptures.

Understanding that stories are passed from person to person, the strength of Duford’s work comes through fellowship and collaboration. In 2007, Duford and his wife artist Tracy Schlapp founded Cumbersome Multiples, a letterpress and design studio that publishes artist books and catalogs including a graphic novel The Unfortunates, which Duford created with actor Ramiz Monsef. The graphic novel is the prequel to The Unfortunates, a musical commissioned by Oregon Shakespeare Festival in 2013 which ran at American Conservatory Theater in San Francisco in 2016. His curatorial projects include the 2012 exhibition Fighting Men: Leon Golub, Jack Kirby, Peter Voulkos at Eric and Ronna Hoffman Gallery for Contemporary Art at Lewis & Clark College, in Portland, Oregon. In 2016, he traveled to Havana with curator Linda Tesner to bring six young Cuban artists to make work in Portland for the exhibition Intersecciones: Havana/Portland also at the Hoffman.

Teaching is central to the fabric of his creative work. Most recently, Daniel was Visiting Associate Professor of Art at Reed College. In 2012 Duford was awarded an Art Matters Grant to create Ringing the Temple Bell, a three-day performance/workshop at the 2013 Queer New York Arts Festival. Ringing the Temple Bell was the seed for an experiential intensive teaching model designed to restructure art education. His commitment to narrative, teaching, and history is the impetus for co-founding Ground Beneath Us, a fellowship and institute in Waterford, Virginia. Ground Beneath Us utilizes all the elements that have nourished Duford’s studio practice and teaching. Ecology, social history, and myth are braided together to reveal narratives of resistance and social justice. As he studied Waterford, Virginia, Duford was electrified by John Brown’s commitment to radical abolitionism. John Brown’s use of political violence has become the central tension in Duford’s most current work John Brown’s Vision on the Scaffold. The watercolor portraits were started in Waterford and were sharpened during a 2018 residency at the MacDowell Colony. A further meditation on American history, the paintings, drawings, and essays promiscuously move from deep tree time to future visions.