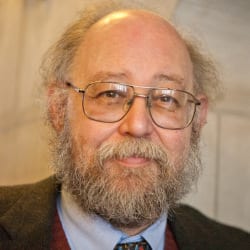 Daniel Garber is Stuart Professor of Philosophy in the Department of Philosophy at Princeton University, where he is also affiliated faculty in the Program in History of Science and the Department of Politics. Garber received his A.B. from Harvard University in 1971, where he also earned his A.M. (1974) and his Ph.D. (1975), writing his dissertation with Roderick Firth and Hilary Putnam. Garber taught at the University of Chicago from 1975, where he was the Lawrence Kimpton Distinguished Service Professor in Philosophy, the Committee on Conceptual and Historical Studies of Science and the Morris Fishbein Center for Study of History of Science and Medicine before leaving for Princeton in 2002. Garber has been a visitor at the University of Minnesota, the Johns Hopkins University, the Institute for Advanced Study in Princeton, the École Normale Supérieure in Lyon, and Corpus Christi College of the University of Oxford. His honors include the Faculty Award for Excellence in Graduate Teaching (University of Chicago), the Isiah Berlin Lectures at the University of Oxford, and the Galileo Lectures at the Scuola Normale Superiore (Pisa). Garber is Doctor Honoris Causa at the University of Bucharest, a member of the Society of Scholars at The Johns Hopkins University, and a member of the American Academy of Arts and Sciences.

Garber’s research is mainly in the history of philosophy and the history of science in the early modern period, understood in its wider cultural and intellectual context. Garber is especially interested in the interaction between what we now think of as philosophical topics and what we now consider scientific questions. He is the author of Descartes’ Metaphysical Physics (1992), Descartes Embodied: Reading Cartesian Philosophy through Cartesian Science (2001), Leibniz: Body, Substance, Monad (2009), and What Happens After Pascal’s Wager: Living Faith and Rational Belief (2009). With Michael Ayers, he is also the co-editor of the Cambridge History of Seventeenth Century Philosophy. With Robert Sleigh he is the founding co-editor of the Yale Leibniz and with Steven Nadler, the founding co-editor of the Oxford Studies in Early Modern Philosophy, which he currently co-edits with Donald Rutherford. Garber is also the author of numerous articles on topics in early modern philosophy and science, including Bacon, Galileo, Descartes, Spinoza, Leibniz, Locke, Newton and others.

His current project is How Philosophy Became Modern in the 17th Century, a study the complex emergence of new philosophies, in the plural, in the late sixteenth and early seventeenth centuries. The argument is that the revolt against Aristotelianism began in the generations before canonical figures like Galileo, Bacon and Descartes, with the publication of a variety of philosophies, very different from one another and from orthodox Aristotelianism. The claim is that these canonical figures, often identified as the founders of modern philosophy need to be read against the background of the so-called novatores (innovators) and the lively debate over novelty in early-modern Europe.