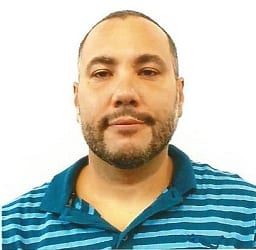 Daniel José Mindiola was born in San Cristóbal, an Andean City located in the southwest sector of Venezuela and left his much beloved country for the US in 1989 (shortly after the wave of protests known as the Caracazo). Once completed high-school in the towns of Ovid-Elsie Daniel then obtained a B.S. degree with honors from Michigan State University. As a "Spartan", he spent three and a half years learning coordination and bioinorganic chemistry under the auspices of Professor Kim R. Dunbar. Daniel then attended the Massachusetts Institute of Technology, and conducted research under the guidance of Professor Christopher "Kit" Cummins. After completing his dissertation on “Arene Extrusion Reactions and Synthesis and Reactivity Studies of Complexes Supported by Sterically Demanding Anilide Ligands”, he was awarded both NIH and FORD post-doctoral fellowships to do research in the laboratories of Professor Gregory L. Hillhouse at the University of Chicago. In 2002, Daniel then accepted an invitation to join the Chemistry Faculty at Indiana University in Bloomington (home of the Hoosiers), Indiana. In 2007 he was promoted to Associate Professor with tenure, and in 2010 to Full Professor. He was the departmental Graduate Advisor from 2008-09, Chair of Graduate Admissions from 2010-2013, and was Associate Editor for the Royal Society of Chemistry journal Dalton Transactions from 2011-2013. After 11 wonderful years in Bloomington, Daniel moved to the University of Pennsylvania where he holds a Presidential Chair Professorship. In 2014 Daniel was elected a Fellow of the Royal Society of Chemistry (FRSC) and is Associate Editor for the American Chemical Society publishing journal Organometallics.

Daniel is an ardent promoter of diversity in the chemical sciences and serves as Chair of the American Chemical Society (ACS) Scholars Program Subcommittee on Minority Affairs. He was the NOBCChE (National Organization and Black Chemists and Chemical Engineers) Charter Founder at Indiana University (2007) and faculty advisor until his departure in 2013. He is the first American Chemical Society Scholar to receive a Ph.D. and since 2006 has been part of the ACS Scholars Selection Committee and Mentoring Program.