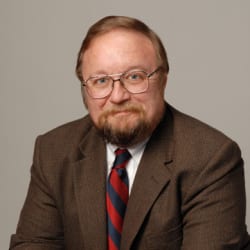 Daniel K. Richter is the Richard S. Dunn Director of the McNeil Center for Early American Studies and Roy F. and Jeannette P. Nichols Professor of American History. He holds a Ph.D. from Columbia University, and his research and teaching focus on colonial North America and on Native American history before 1800. Prior to joining the Penn faculty, he taught at Dickinson College and the University of East Anglia, and he has been a visiting professor at Columbia University. He served as acting chair of Penn’s History Department in 2013-2014.

Richter is currently researching English colonization during the Restoration era, for a book tentatively titled The Lords Proprietors: Land and Power in Seventeenth-Century America, under contract with Harvard University Press. His most recent book is Trade, Land, Power: The Struggle for Eastern North America (University of Pennsylvania Press, 2013). He is also author of Before the Revolution: America’s Ancient Pasts (Harvard University Press, 2011), which was named by the Wall Street Journal as one of the ten best non-fiction books of 2011; Facing East from Indian Country: A Native History of Early America (Harvard University Press, 2001), which was a finalist for the Pulitzer Prize in History and won the Louis Gottschalk Prize in Eighteenth-Century History; and The Ordeal of the Longhouse: The Peoples of the Iroquois League in the Era of European Colonization (University of North Carolina Press, 1992), which received both the Frederick Jackson Turner Award and the Ray Allen Billington Prize from the Organization of American Historians.

He is co-editor, with James H. Merrell, of Beyond the Covenant Chain: The Iroquois and Their Neighbors in Indian North America, 1600-1800 (Syracuse University Press, 1987; rev. ed. Penn State University Press, 2003) and, with William A Pencak, of Friends and Enemies in Penn’s Woods: Indians, Colonists, and the Racial Construction of Pennsylvania (Penn State University Press, 2004). His scholarly articles have appeared in American Indian Quarterly, Ethnohistory, The Journal of American History, The Journal of the Early Republic, Pennsylvania History, Reviews in American History, The William and Mary Quarterly, and several collaborative volumes. Along with his colleagues Kathleen Brown, Max Cavitch, and David Waldstreicher, he edits the “Early American Studies” book series, published by the University of Pennsylvania Press in collaboration with the McNeil Center for Early American Studies.

He has been elected as a member of the American Antiquarian Society and the Society of American Historians, as a Fellow of the New York Academy of History, and as a Corresponding Member of the Massachusetts Historical Society, and is an Organization of American Historians Distinguished Lecturer. He has served on the boards of several professional organizations, including the Pennsylvania Historical Association, the Omohundro Institute of Early American History and Culture, the Society for Historians of the Early American Republic, and the Library Company of Philadelphia.

In 2016 Richter received the Provost’s Award for Distinguished PhD Teaching and Mentoring from the University of Pennsylvania.