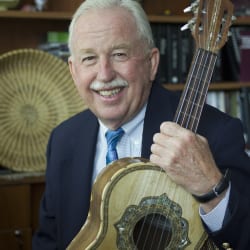 Dr. Daniel Sheehy has been the Director and Curator of Smithsonian Folkways Recordings since 2000. He concurrently served as Director of the Smithsonian Center for Folklife and Cultural Heritage 2009-2013 and Acting Director of the Smithsonian Latino Center 2008-2009. As Director of Folk & Traditional Arts at the National Endowment for the Arts 1992-2000 and staff ethnomusicologist and Assistant Director (1978-1992), Sheehy directed the National Heritage Fellowship awards and grants programs of $4 million annually. A Fulbright-Hays scholar in Veracruz, Mexico (1977-78), he earned his Ph.D. in ethnomusicology from UCLA (1979). He served as co-editor with Dale Olsen of the South America, Mexico, Central America, and the Caribbean volume of the Garland Encyclopedia of World Music. His book Mariachi Music in America: Experiencing Music, Expressing Culture was published by Oxford University Press in 2006. Under his leadership, Smithsonian Folkways has published more than 200 recordings, earning five Grammy awards, one Latin Grammy, and twenty-one nominations. Sheehy currently serves as President of the Alliance for California Traditional Arts, board member of the National Council for the Traditional Arts and the Association for Cultural Equity, and past board member of the Society for Ethnomusicology and the American Folklore Society. The American Folklore Society honored him with the Benjamin A. Botkin prize in 1997, recognizing major impact on the field of public folklore, and the Américo Paredes prize in 2010, recognizing a career of excellence in integrating scholarship and engagement with the people and communities one studies. In 2015, the National Endowment for the Arts awarded him a Bess Lomax Hawes National Heritage Fellowship.