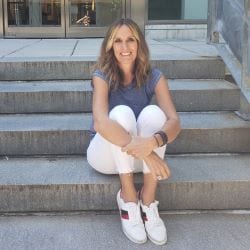 Danna Singer is a photographer and educator. She received her MFA from Yale University School of Art and BFA from Pratt Institute, Brooklyn, NY.

Singer’s work largely focuses on the social ramifications of economic inequality, depicting the struggles of working class Americans. Her photographs were selected for The Best New Yorker Photography of 2019, and The New York Times, Year in Pictures 2019, and have been published by Der Spiegel, the ACLU, Lens Culture, LensScratch, Feature Shoot, and The New York Times Magazine.

In 2018, she was awarded a residency fellowship at Yaddo and named one of PDN’s 30 Emerging Photographers to Watch. She received the John Ferguson Weir Award, Yale University (2017), the Schickle-Collingwood Prize, Yale University (2016), and the Juncture Fellowship, Orville H. Schell, Jr. Center for International Human Rights/Yale Law School (2016).