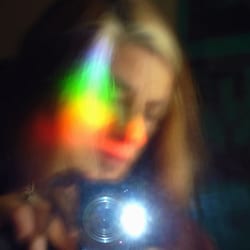 Dara Birnbaum (b. 1946, New York, New York) lives and works in New York City, having received a Bachelor of Architecture degree from Carnegie Mellon University, a B.F.A. in Painting from the San Francisco Art Institute, and a Certificate in Video and Electronic Editing at the Video Study Center at the New School for Social Research, New York. Dara Birnbaum’s pioneering video, media, and installation work has, over the past four decades, addressed the ideological and the aesthetic character of mass media imagery and has been considered fundamental to our understanding the history of media art. Birnbaum was one of the first artists to design complex and innovative installations that juxtapose imagery from multiple sources while also integrating three dimensional elements—large-scale photographs, sculptural, or architectural elements—into the work. In her videotapes and multi-media installations, Birnbaum applies both low and high-end video technology to subvert, critique, or deconstruct the power of mass media images and gestures to define mythologies of culture, history and memory. In addition to showing in traditional art spaces, other outlets for Birnbaum’s work have included broadcast television, MTV, video/music clubs, and public spaces such as New York's Grand Central Station. Find more of her work at Marian Goodman Gallery and Electronic Arts Intermix.