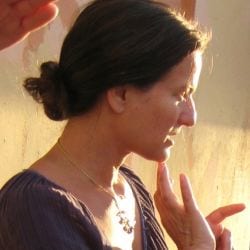 Dara Friedman is a German born artist and filmmaker working in Miami. She uses everyday sights and sounds as the raw material for film and video artworks that reverberate with emotional energy. With a background in structural film and dance, Friedman’s cinema calls for a radical reduction of the medium to its most essential material properties. In place of linear storylines, her films typically portray straightforward actions and situations that unfold according to predetermined rules and guidelines.

Yet for all of Friedman’s strenuous logic and discipline, her approach remains unabashedly sensual and emotive. Bearing rich imagery and a strong emphasis on bodily experience, her films generate moments of high-pitched, cathartic intensity as well as serene, even euphoric interludes.

Her institutional education included the Städelschule in Frankfurt with Peter Kubelka, as well as at the Slade School of Fine Art, University College, in London; University of Miami, School of Motion Pictures; and Vassar College in Poughkeepsie, New York. Friedman is the recipient of the Rome Prize (2000) and is represented by Gavin Brown’s enterprise, New York and Rome.