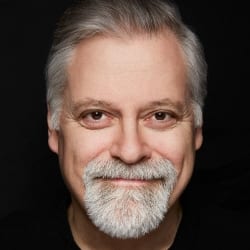 Daron Hagen is a prolific composer of acoustic and electro-acoustic music for the concert hall and stage. He is also a stage director, conductor, librettist, essayist, clinician, and collaborative pianist. Described as a “composer born to write operas” (Chicago Tribune) whose music is “dazzling, unsettling, exuberant, and heroic” (The New Yorker), his opera Amelia was described as “one of the 20 best operas of the 21st century” by Opera News. Hagen’s work often includes collaborations with both mainstream and cutting-edge filmmakers, directors, conductors, choreographers, and musicians worldwide.

Hagen joined the Artist Faculty of the Chicago College of the Performing Arts in 2017, which has given him a forum in which to develop his new works in collaboration with students and faculty drawn from the conservatory and Roosevelt University’s many disciplines. He has served as Artist-in-Residence for the Princeton Atelier, Miami University, the University of Nevada Las Vegas, the University of Pittsburgh, Baylor University, and as Composer-in-Residence for the Ohio Opera Theater and Long Beach Symphony Orchestra. He has been commissioned by such renowned organizations as the American Composers Orchestra, American Symphony Orchestra, Buffalo Philharmonic, Curtis Institute of Music, Louvre, Metropolitan Museum of Art, National Symphony, New York Philharmonic, Philadelphia Orchestra, Phoenix Symphony, Seattle Symphony, and the Sarasota and Seattle Operas, and his work has been championed by such world-renowned conductors as Leonard Bernstein, Leon Botstein, Michael Christie, JoAnn Falletta, Lukas Foss, Kelly Kuo, Joseph Mechavich, Michael Morgan, Kenneth Schermerhorn, Leonard Slatkin, and Robert Spano.

Hagen is the recipient of numerous prestigious awards including the Academy Award (2015) and the Charles Ives Fellowship (1983) from the American Academy of Arts and Letters; the Guggenheim Prize; the Kennedy Center Friedheim Prize; the Columbia University Bearns Prize; the ASCAP-Nissim Prize, and both the ASCAP Samuel Barber and Irving Berlin Scholarships; two Rockefeller Foundation Bellagio Residencies; the Camargo Foundation Residency; the Barlow Endowment Prize & Com; the Gelin Tanglewood Fellowship; and development awards from ASCAP, the National Endowment for the Arts, the Mellon Foundation, the Readers Digest Fund, and Opera America.

Recent highlights include his own productions of A Woman in Morocco for Kentucky Opera, and I Hear America Singing for the Skylight Music Theater; Symphony No. 5 for the Phoenix Symphony; and a new complete orchestral score to the Chaplin film A Dog’s Life for premiere this summer at the Wintergreen Music Festival. He is currently developing Orson Rehearsed, a broadly elastic, multi-media musico-dramatic “prestidigitation” featuring Fifth House Ensemble; and Afterwards, an evening-long song-cycle for four singers and piano co-commissioned by Philadelphia’s Lyric Fest and the Brooklyn Art Song Society.
Hagen has served as president of the Lotte Lehmann Foundation, as a board member (CRI, Joy in Singing), as a trustee (Douglas Moore Fund for American Opera), and is one of two Lifetime Members of the Corporation of Yaddo. Formerly a Composer Mentor for American Opera Projects, he is currently a Distinguished Mentor for Composers Now and founding artistic director of the New Mercury Collective. A passionate teacher, his masterclasses in vocal performance, composition, and acting are universally-admired for their exilharating combination of unpretentious practical advice, knowledge of the operatic and song repertoire, commitment to process, and resolute eschewing of orthodoxies.

Born in Wisconsin, Hagen studied composition with Ned Rorem at the Curtis Institute and David Diamond at the Juilliard School, then worked extensively as a copyist and editor for numerous concert composers and Broadway shows, including Elliot Carter, Virgil Thomson, Gian Carlo Menotti, and Disney. He taught for a decade at Bard College, and served on the faculties of the Curtis Institute, the Chicago College of Performing Arts, New York University, and the Princeton Atelier, among others, before turning his attention solely to teaching privately and creating. His music is recorded on Naxos, Albany, CRI, and Bridge. A Manhattanite for 28 years, he and his wife, composer Gilda Lyons, moved Upstate in 2011 to raise their sons.

He is managed by Scott Levine as a stage director; and his music is published by Peermusic Classical, Burning Sled, Carl Fischer, and E.C. Schirmer.

A complete list of his over 200 art songs, song cycles, and choral works, eight operas, four symphonies, twelve concerti, and over forty chamber works may be found, along with information about upcoming performances and premieres, at his website.