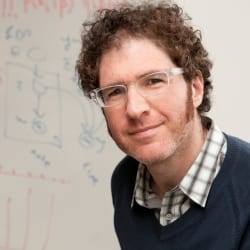 David Blei is a Professor of Statistics and Computer Science at Columbia University. His research is in statistical machine learning, focusing on scalable probabilistic models to uncover useful patterns in massive data. He works in a variety of application areas, including natural language, images, music and sound, social networks, user behavior data, and scientific observation.

David earned his Bachelor's degree in Computer Science and Mathematics from Brown University (1997) and his PhD in Computer Science under Michael Jordan from the University of California Berkeley (2004). Before arriving to Columbia, he was an Associate Professor of Computer Science at Princeton University. He has received several awards for his research, including a Sloan Fellowship (2010), Office of Naval Research Young Investigator Award (2011), Presidential Early Career Award for Scientists and Engineers (2011), Blavatnik Faculty Award (2013), and ACM-Infosys Foundation Award (2013). He is a fellow of the ACM.

Traditional applications of statistics and machine learning often take a "cookbook" perspective, where investigators find standard methods that match their particular data analysis problems. David's work posits that this is no longer effective for many modern data analysis problems. Rather, modern data analysis requires tailored methods, methods designed to further a discipline by analyzing its data within the context of its unique body of knowledge. A tailored method encodes this knowledge into a new procedure, one that accounts for the discipline's theories and assumptions and illuminates the data's hidden truths. David's research vision is to enable investigators from diverse disciplines to easily invent, use, and benefit from such methods.

To this end, David will use his Guggenheim fellowship to develop new methods for probabilistic modeling, facilitate its practice in freely-available software, and write a research monograph to communicate its practice to scientists and scholars.

Follow this link to view more information about David's work, including links to publicationsand software.