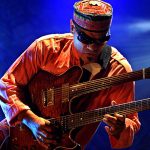 David "FuZe" Fiuczynski’s music is often described as unclassifiable, challenging, and invigorating. Fiuczynski leads the underground cult band Screaming Headless Torsos and has toured and/or recorded with Jack DeJohnette (Miles, Coltrane, Sun Ra, etc.), Stewart Copeland (the Police), Meshell Ndegeocello, Rudresh Mahanthappa, John Medeski, Hasidic New Wave, and many more and performed at festivals all over the world. His recent music melds traditional melodic elements from the Middle East, Asia, India, and Eastern Europe, with rock, funk, electronica, and other styles. This concept started on a gig in Morocco in 1992. The Moroccan players noted that Hendrix visited the country and this gave Fiuczynski an idea—hard grooves with Eastern-inflected melodies putting the listener into a very colorful trance—could this be the music that Jimi would play today? Fiuczynski’s band "KiF" celebrates a living Hendrix who’s kickin’ it in Casablanca and rocks the Casbah every Saturday night!

Born in the U.S., David grew up in Germany where he was always interested in mixing and “fuzing” different music elements. FuZe studied with Dave Holland, George Russell, Bob Moses, Ran Blake, but equally important was the New York school of hard knocks with MeShell Ndegeocello, Bernie Worrell, Billy Hart, Ronald Shannon Jackson and the Black Rock Coalition. Returning to New England Conservatory, FuZe received a master’s degree (2008) with a focus on microtonality, studying with Joe Maneri, Indian sitarist Peter Row, Turkish music specialist Bob Labaree, and Chinese ghuzeng player Shin Yi Yang. “Much of my musical inspiration comes from non-musical sources: paintings and East Asian and Arabic calligraphy and architecture. I love the colors of Matisse, Van Gogh, the Fauvists and German expressionists, the jagged explosions of Peter Voulkos’ pottery and the delicate restraint of Taoist poetry. I really admire musicians with a unique and fiery sound like Eric Dolphy, Nina Hagen and Don Pullen for example.”

Fiuczynski is a 2009 Mass Arts Council Fellow in composition and also the director of the Planet MicroJam Institute at Berklee College of Music: "At the crossroads of new beats, microtonal harmonies, and eastern melodic inflections and improv concepts, new musical ideas are on the horizon. New possibilities emerge from the collision of sonic esthetics from our increasingly shrinking global village. The aim is to create music that sounds like a Gauguin painting—a raw, powerful, extremely colorful mix of Eastern and Western elements."