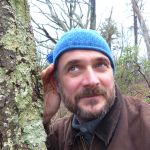 Education: Sewanee: University of the South

David Haskell’s work integrates scientific, contemplative, and literary studies of the natural world. He is currently at work on Songs of Trees, a book about humanity’s varied roles within biological networks, as heard through the acoustics of trees.

His previous book, The Forest Unseen: A Year’s Watch in Nature (Viking Penguin, 2012), was winner of the National Academies’ Best Book Award for 2013, finalist for the 2013 Pulitzer Prize in nonfiction, winner of the 2013 Reed Environmental Writing Award, winner the 2012 National Outdoor Book Award for Natural History Literature, and runner-up for the 2013 PEN E. O. Wilson Literary Science Writing Award. James Gorman’s profile in the New York Times says of Haskell that he “thinks like a biologist, writes like a poet, and gives the natural world the kind of open-minded attention one expects from a Zen monk rather than a hypothesis-driven scientist.” In addition to numerous scientific papers, Haskell has published essays, poems, and op-eds.

Haskell holds degrees from the University of Oxford (B.A. in zoology; thesis supervisor, W. D. Hamilton) and from Cornell University (Ph.D. in ecology and evolutionary Bbiology; thesis supervisor, D. W. Winkler). He is Professor of Biology at the University of the South, where he served as Chair of Biology. He is a Fellow of the American Council of Learned Societies and was granted Elective Membership in the American Ornithologists’ Union in recognition of “significant contributions to ornithology.” His work has been sponsored by the National Science Foundation,  Environmental Protection Agency, Fish and Wildlife Service, World Wildlife Fund, and Center for Contemplative Mind in Society, among others. He serves on the boards and advisory committees of regional land conservation organizations.

Haskell’s teaching has received national attention for the innovative ways that his classes combine science, contemplation, and action in the community. In 2009, the Carnegie and CASE foundations named him Professor of the Year for Tennessee. The Oxford American featured him in 2011 as one of the southern U.S.’s most creative teachers, and his teaching has been profiled in USA Today, the Tennesseean, and other newspapers.

He lives at Cudzoo Farm in Sewanee, Tennessee, with his wife, Sarah Vance. Haskell explores natural history, science, and literature on his Ramble blog and twitter feed.