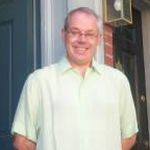 David Wallace grew up in a small factory and brickmaking town just north of London, England, at the junction of the London to Liverpool/Oxford to Cambridge railway lines; the town, since swallowed up into the new city of Milton Keynes, was a mix of London overspill, Buckinghamshire locals, Sicilians, and Pakistanis. His father, Sid, was a fighter pilot in World War II and later an engineer; his mother, Beryl, was in the Women’s Land Army until 1950, later worked in factories and shops, and was recently President of Wessex Ladies Bowls Club. His brother, Richard, works at Hemel Hempstead Post Office. David (and Richard) Wallace attended Bletchley Grammar School. He first read Chaucer at 15 and subsequently fell under the influence of medievalists Derek Pearsall and Elizabeth Salter while studying for a degree at York (B.A. in English and Related Literature, 1976); he studied Dante under A.C. Charity and spent summers learning Italian in Perugia. He then taught at the Karl-Marx-Universität, Leipzig in 1976-77 and toured eastern Europe; his first two articles, "Inside East Germany," were published in the Catholic journal The Tablet (231, 1977, pp. 859-60, 884-5). In 1977-78 he taught English to Italian teenage girl typists and to factory workers in Piedmont, Italy, and worked on translating Pier Paolo Pasolini’s Le ceneri di Gramsci (published Peterborough: Spectacular Diseases, 1982). In the summer of 1978 he worked at L’Arche communities (for mentally handicapped adults) in London, Liverpool, and Inverness before beginning doctoral studies at St Edmund’s College, Cambridge.

Following a Research Fellowship at Cambridge (1981-3) and a Mellon Fellowship at Stanford (1984-5), Mr. Wallace taught at the University of Texas at Austin (1985-91) and then at the University of Minnesota, where he was Professor of English and Frenzel Chair in Liberal Arts (1991-96). He taught at the Charles University, Prague, for weeks in 1994 and 1995 and has made more recent research trips to Flanders, Calais, and Tenerife. At Penn he is based in the English Department and belongs to programs in Comparative Literature, Italian Studies, and Religion. He is also collaborates with Kevin Brownlee (French and Italian), Rita Copeland (Classical Studies), Emma Dillon (Music), Ann Matter (Religion), Ed Peters (History), Emily Steiner (English), and others in the current revitalization of Medieval Studies at Penn; he forms part of the Penn Med/Ren group that meets to discuss work every two weeks or so; he works with and learns from a spectacular cadre of graduate students.

Having failed to find any soccer in center-city Philadelphia (and heeding the voice of creaking bones), David Wallace–formerly sweeper for Northwest Airlines–has taken up running, focusing on the Broad Street run (every May) and the Jefferson half-marathon (September). He is a lifelong MUFC supporter. With Peter Stallybrass and Roger Chartier, he attends rugby internationals every Spring at Fado, 15th and Locust, Philadelphia. His contribution to the Valentine’s Day NPR Soundings show was good on the history of courtly love and useless on current protocols of dating. He took part in a four hour "Chaucer" marathon on Radio 3 in October 2000; more recent BBC contributions have been to Terry Jones’s I Hate the Renaissance program and to a feature on the histories of stupidity (broadcast December 2002) and laziness (2004).

His fattest book, Chaucerian Polity: Absolutist Lineages and Associational Forms in England and Italy, appeared with Stanford UP in 1997 (paper 1999). With Barbara Hanawalt, co-editor, he has published Bodies and Disciplines: Intersections of Literature and History in Fifteenth-Century England, and Medieval Crime and Social Control. Both of these volumes form part of the University of Minnesota Medieval Cultures series (which he edited with Barbara and Rita Copeland until, having reached 40 volumes, it was summarily canned in 2002). He has also edited The Cambridge History of Medieval English Literature (1999; revised paperback ed. 2002) and (with Carolyn Dinshaw) The Cambridge Companion to Medieval Women’s Writing (2003). He has also published on Catherine of Siena, Margery Kempe, medieval literary theory, rhetoric, "Cleanness" (and nominalist theology), Le Roman de la Rose, pilgrim badges, Beatrice, Dante, Boccaccio, Petrarch, Pasolini, and on the relations of men to feminist critique. He has recently published "Humanism, Slavery, and the Republic of Letters" in The Public Intellectual, ed. Helen Small (Oxford: Blackwell, 2002), pp. 62-88; this appears rewritten as part of Premodern Places: Calais to Surinam, Chaucer to Aphra Behn (Blackwell, 2004). This new book reclaims the affective power of places (known and unknown), essaying forms of long historicism that range freely through centuries. The book speaks to the currently muddled state of English culture "at Calais Gate" (neither fully part of greater European affairs, nor fully able to shake the residual trappings of four hundred years of global imperium). It ponders the possibilities of historicist work in the face of postcolonial critique; it traces processes whereby black/white was constructed as the defining difference of the premodern world.

In 2004-05 David Wallace will be writing on geneaologies of women’s writing, 1098-1690, on Margery Kempe, and on Malory and Sir Gawain; and he will be taking a close interest in the teaching and performing of Chaucer in schools and colleges.