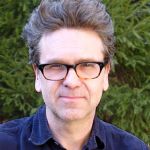 David Means was born and raised in Kalamazoo, Michigan.  He has published four short stories collections, including Assorted Fire Events, which won the Los Angeles Times Book Prize for Fiction and was a finalist for the National Book Critics Circle Award.  His third collection, The Secret Goldfish, was a finalist for the Frank O’Connor International Short Story Prize.  His most recent, The Spot, was a New York Times Notable Book in 2010.  Editions of his work have been published in nine languages.  He has twice been the recipient of the O. Henry Prize, and his stories have appeared in Best American Short Stories, Best American Mystery Stories, The New Yorker, Harper’s, The Paris Review, and Zoetrope.  He teaches at Vassar College and lives in Nyack, New York.