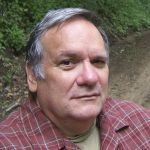 As a young man, David Rhodes worked in fields, hospitals, and factories across Iowa, nurturing his love of reading along the way. After receiving an M.F.A. from the Iowa Writers’ Workshop in 1971, he published three novels in rapid succession: The Last Fair Deal Going Down (Atlantic/Little, Brown, 1972), The Easter House (Harper & Row, 1974), and Rock Island Line (Harper & Row, 1975). A motorcycle accident in 1976 left him paralyzed from the chest down, which brought a temporary halt to his publishing career. In 2008, he returned to publication with Driftless, which has been heralded as a critical success. Rhodes lives with his wife, Edna, in rural Wisconsin.