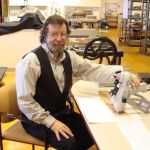 David A. Scott is a Professor of Art History at the University of California, Los Angeles, and Founding Director (2003–2011) of the UCLA/Getty Archaeological and Ethnographic Conservation Program.

After graduating from the University of Reading, UK, with an honors B.S. degree in chemistry, he worked in industry for a while before returning to take an honors B.A. degree in archaeological conservation at the Institute of Archaeology, London University, followed by a Ph.D. in ancient metallurgy from University College, London. He began teaching at the Institute of Archaeology in 1981 and in 1987 took up the position as Head, Museum Research Laboratory, at the J. Paul Getty Museum based in Malibu. In addition, since 1983 he has edited the international journal Studies in Conservation, the longest tenure for an editor of that publication. He left the Getty in 2003 to start the exciting new venture of getting a conservation training program up and running at UCLA, hiring the staff and faculty, which began to accept students in 2005. The conservation program is now recognized as one of the outstanding conservation training programs in the United States.

David Scott has written over 120 peer-reviewed papers and eight books. His main area of research work has been in the field of ancient metallic artefacts and pigments used in Egyptian art. He has studied and published on the microstructural investigation of metallic works of art from the Middle East, Asia, England, India, Europe, China, South America, and Africa. His book Copper and Bronze in Art: Corrosion, Colorants, Conservation, published in 2002, was awarded several prizes, including the first prize from the Association of American Publishers as the best scholarly/art book published in the United States for that year.

Since then he continues to publish regularly and has greatly enjoyed branching out into the realm of self-publishing. Several of his metallographic compilations have been published, and two Chinese translations of his books have been issued, in 2009 and 2012, and recently the Czech Cultural Press has begun to translate another two of his books into Czechoslovak, scheduled to be issued in 2014 and 2015.

After creating and teaching a new course entitled “Art: Fakes, Forgeries and Authenticity” for art-history students at UCLA, he has become increasingly fascinated by the problems of the authentic nature of art works from conservation, art historical, and philosophical points of view. The modern cult of authenticity has resulted in a plethora of problems with regard to how the concept is viewed today, either from those lauding the true nature of the authenticity of art, or those denying that it exists at all and simply represents a socially constructed concept. During his Guggenheim Fellowship, he will study the issues of replicas, copies, and authenticity in art, a truly inspiring opportunity to undertake a rarely available period of concerted research into this exciting topic.