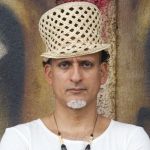 For over twenty-six years, David Zambrano has been a monumental figure in the international dance community, and his passion for cultural exchange continues to influence his work. Living and making work in Amsterdam and teaching/performing internationally, Zambrano is an ambassador and liaison across many borders, bringing together artists from all over the planet for his projects.

An inspiring teacher, thrilling performer, and innovative choreographer, Zambrano has contributed generously to the field of dance in ways that have influenced many and impacted the dance world from several angles. His development of the “Flying Low” and “Passing Through” techniques are among his recent innovations that have helped to lead improvisational dance into an exciting future. Many of his projects have continuously influenced Zambrano’s pedagogic methods, keeping them fresh and interesting for the students from around the globe.