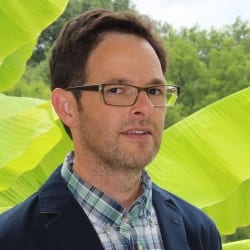 Davis McCombs was born in 1969 and grew up in Hart County, Kentucky. He attended Harvard University, the University of Virginia, and Stanford University. He is the author of three volumes of poetry including Dismal Rock (Tupelo Press 2007) and lore (University of Utah Press, 2016).

His first book, Ultima Thule, was chosen by W. S. Merwin as the winner of the 1999 Yale Series of Younger Poets and went on to be named one of five finalists for a National Book Critics Circle Award in poetry.

He is the recipient of a grant from the National Endowment for the Arts, a Ruth Lilly Poetry Fellowship, the Larry Levis Editor’s Prize from The Missouri Review, the Dorset Prize, the Laman Library Writers Fellowship, the Agha Shahid Ali Prize, and the Porter Fund Literary Prize.

McCombs directs the Program in Creative Writing and Translation at the University of Arkansas in Fayetteville where he lives with his wife, the poet and photographer Carolyn Guinzio, and their two children.