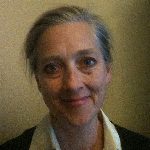 Born in Woburn, Massachusetts, Dawn Clements lives and works in Brooklyn, New York. Working primarily on paper, Ms. Clements draws from the spaces of her immediate environment and the visual spaces of cinema. Her works range from room-sized panoramas (i.e., 10 x 45 feet) to small framed works. Subjective views of the world, their meanings and forms, are central to her work. She makes images of what and how she sees, hears, and touches in a world that resists framing and where nothing is fixed. Each perspective in Clements’ drawings is local, almost never an overview. Often the drawings sprawl out of a rectangular shape. As her gaze moves across objects and spaces, so the drawings grow, often literally taking new shape. Sometimes there is an illusion of seamlessness, but the drawings are fractured and composed of multiple, often fluid, points of view. The adding, the folding, the drawing: all are evidence of Clements’ physical process, in a way an expression and document of her movement. She creates a sense of wholeness from fragments, piecing, editing, suturing multiple points of view to create a sense of moving through spaces, extending time. In her work images are fixed, but the vanishing point is usually in motion, and unstable.

Forthcoming shows include exhibitions at Arkansas Arts Center (Little Rock) and Fondation Salomon (Alex, France, 2013). In 2005 she received a fellowship in the category of Printmaking/ Drawing/Artists’ Books from the New York Foundation for the Arts; in 1993 grants from the Bohen Foundation and Arts Matters (Rockefeller Foundation); in 2011 was an artist in-residence at Sint-Trudoabdij in Male, Belgium; in 2009 at Taft School in Watertown, Connecticut; in 2000 at Middlebury College; in 2004 at the Farpath Residency in Dijon, France; and was a guest printmaker at Princeton University in 2006. Ms. Clements’ work can be found in many public and private collections, including the Museum of Modern Art (NYC); Whitney Museum of American Art; Saatchi Collection (London, England); Western Bridge Collection (Seattle, WA); Tang Museum (Saratoga Springs, NY); and Princeton Art Museum (Princeton, NJ). Ms. Clements currently teaches at California Institute of the Arts (Valencia, CA) and Rhode Island School of Design (Providence). Her artwork is represented by Pierogi Gallery in Brooklyn.