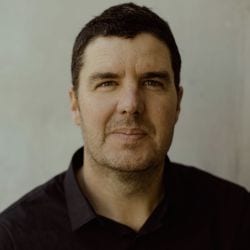 Most recently, he co-edited They Said: Contemporary Collaborative Writing (Black Lawrence) and Native Voices: Indigenous American Poems, Craft, and Conversations (Tupelo). His poems have appeared in The New York Times, Best American Poetry, American Poetry Review, Best of the Net, Kenyon Review, Zyzzyva, Ploughshares, Southern Review, Harvard Review and many others. He has written essays and reviews for dozens of publications including The San Francisco Chronicle, Huffington Post, Los Angeles Review of Books, and BOMB. He is a professor at the University of San Francisco, where he has won both the Dean’s Scholar Award and the University’s Distinguished Research Award.

About his fellowship project, he writes, “I am working on a new poetry collection that triangulates three seemingly unrelated concerns. On one hand, there are poems that take on controversial issues like climate change, gun violence, and race. On the complete other end of the spectrum is an elliptical and somewhat experimental series in response to specific artworks by Cy Twombly. Between these two modes is another unexpected series—elegies for my late father who died in 2017. Somewhere is a through-line. Somehow, the Venn diagrams overlap and even inform the other. My goal is to find out why. And how.”