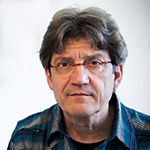 His work has been exhibited nationally in both group and solo shows, notably at The Tang Museum (book), The American Academy of Arts and Letters, and The DeCordova Museum. Internationally Snyder’s work has been presented at The Beijing Olympic Park for the 2008 Beijing Olympic Games, Sculpture By the Sea: Sydney Australia, Berlin Fashion Week, and The Instituto Cultural Peruano, Lima.

Snyder’s work has been collected privately and may also be found in the public collections of Fidelity Investments, The Tang Museum, The Museum of Art at The Rhode Island School of Design, the Smart Museum of Art at the University of Chicago, Albany International Airport, The City of Beijing, Freedom Park Ordos City, Mongolia.
Snyder’s work is currently represented through Cade Tompkins Projects.

Snyder’s sculpture has been characterized as uncanny “graphical” organicism experienced through seamless assemblies of highly considered forming, molding, and lamination. Drawing plays a large role in Snyder’s studio and for many years he has been workshopping a sort of  bioconvergence of his graphic images into objects and sculpture.