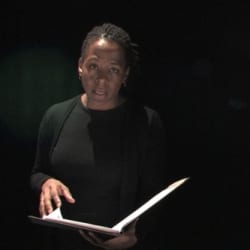 Deanna Bowen is a descendant of the Alabama and Kentucky born Black Prairie pioneers of Amber Valley and Campsie, Alberta. She is a Toronto based interdisciplinary artist and educator who holds a Masters Degree in Visual Studies from University of Toronto (2008) and Diplomas of Fine Art from Emily Carr College of Art and Design (1994) and Langara Community College (1992). Her work has been shown in Canada, the US, and Europe in numerous film festivals and galleries, including the Oberhausen International Short Film Festival, the Kassel Documentary Film & Video Festival and Union Docs Center for Documentary Arts. She is the recipient of the 2014 William H. Johnson Prize and has been awarded numerous grants, fellowships and commissions in support of her work throughout her twenty-three year practice.

Deanna makes use of a repertoire of artistic gestures in order to define the Black body and trace its presence and movement in place and time. In recent years, her work has involved rigorous examination of her family lineage and their connections to the Black Prairie pioneers of Alberta and Saskatchewan, the Creek Negroes (Black Indians) and All-Black towns of Oklahoma, the extended Kentucky/Kansas Exoduster migrations, and the Ku Klux Klan. The artistic by-products of this research were presented most recently at the ICA at the University of Pennsylvania, as well as the McMaster Museum of Art and the Art Gallery of York University. Her works and interventionist practice have garnered significant critical regard internationally. She was an invited presenter in the Creative Time Summit at La Biennale di Venezia - 56th International Art Exhibition in 2015; and her writings and art works have appeared in numerous publications including Towards an African-Canadian Art History: Art, Memory and Resistance; Black Atlantis: A Literary Archeology of the Black Prairies; North: New African Canadian Writing - West Coast Line; and Má-Ka : Diasporic Juks: Contemporary Writing by Queers of African Descent.

*Follow this link to view detailed documentation of all works displayed in slide show.

Photograph credit: Still from sum of the parts: what can be named. 2010, Single channel video, 18:47 minutes, Colour, HD