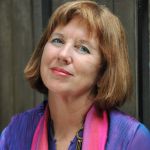 "I boarded those third class trains to enlightenment, and befriended the fragile heroes of this book,” Francesco Clemente wrote of A Blue Hand. “Deborah Baker's narrative is concise, rich, unsentimental and shows how, just like India, a spiritual journey is grotesque, sublime, comical, but never sad." Of The Convert, Michelle Goldberg wrote in Tablet, “[Baker has written a book] that mimics her own process of discovery. To do so, she adopted a daring, unconventional narrative method—just how unconventional isn’t clear until the very end. [H]er approach succeeds in creating a hall of mirrors that forces the reader into constant reassessments.” Deborah Baker is the author of four works of nonfiction: Making A Farm: The Life of Robert Bly (1982), In Extremis: The Life of Laura Riding (1993), A Blue Hand: the Beats in India (2007) and The Convert: A Tale of Exile and Extremism (2011).  In Extremis was a finalist for the Pulitzer in Biography in 1994 and The Convert, for which she received a Cullman Fellowship at the New York Public Library, was a finalist for a National Book Award in Nonfiction in 2012. The Convert has been translated into Arabic and Indonesian; a translation into Urdu is forthcoming. Born in Charlottesville in 1959, Baker lived in Virginia, Puerto Rico, and New England before attending the University of Virginia. She worked as a book editor in New York for many years. Her articles, essays, and book reviews have appeared in the London Review of Books, Wall Street Journal, American Scholar, Paris Review, Caravan, Bomb, New York Times, and other publications. With each of her books, Deborah Baker has tried to re-imagine the form of biography, tailoring the work’s structure to primary material and experimenting with different forms of narration. She writes: “I am more interested in my subjects’ voices than my own. I try to create narratives that require the reader to be imaginatively engaged, rather than a passive audience to my own scholarly insights. I often choose my subjects, or a critical chapter in their lives, with the ulterior aim of complicating a perceived consensus. Though I enjoy making connections and archival discoveries, the story always comes first.”   She is presently at work on The Last Englishman, a book set during the golden age of Himalayan mountaineering and India during the Second World War. It will focus on the lives of two explorers, elder brothers of W. H. Auden and Stephen Spender, and the woman they both loved. Author photo by Julienne Schaer Read "The Subject Talks Back," by Deborah Baker, in the Paris Review