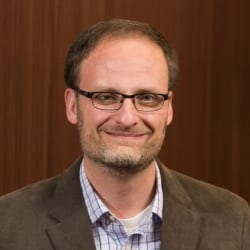 Derek R. Peterson is Professor of History and African Studies at the University of Michigan. For the past six years he has been working with colleagues at Mountains of the Moon University (in western Uganda) to rescue, preserve, organize, and digitize endangered government archives in Uganda. This work is occasioned by the Ugandan government’s disinvestment from history: in the official view archives are detritus from an old and forgettable era. Peterson’s work—which has been generously supported by the Center for Research Libraries—has thus far resulted in the preservation of seven collections. Several of these archives have been brought into the library of Mountains of the Moon University, where they are available for students and citizens to consult.

This archive work has illuminated areas of political life that had previously been invisible. With funding from the Guggenheim Foundation Peterson will spend calendar year 2019 completing the writing for a scholarly book about the genealogy of populism in post-colonial Uganda. The book will begin in the 1950s, the era of “decolonization”, a time when cultural minorities organized to defend their cultural heritage from the enfolding weight of an African majority government. In the 1960s and 70s these campaigners were made enemies of the state, and populists had to find new registers in which to work. Some became museum curators, collecting objects that anchored people to an imagined past. Others became subversives, organizing oppositional movements that challenged the territorial integrity of the Ugandan state. These campaigners built on the infrastructures that minorities had authored in earlier decades. By telling their story, Peterson aims to illuminate the logic that guided dissenting politics under the governments of Idi Amin and Milton Obote.

Peterson is the author of two single-authored books, most recently Ethnic Patriotism and the East African Revival (2012), which won the Herskovits Prize of the African Studies Association and the Martin Klein Prize of the American Historical Association. He is the editor or co-editor of seven books, most recently African Print Cultures: Newspapers and their Publics in the Twentieth Century (2016, with Stephanie Newell and Emma Hunter).

Peterson is a Fellow of the Royal Historical Society and a winner of the Philip Leverhulme Prize in Modern History, given by the Leverhulme Foundation to younger scholars based in the United Kingdom.