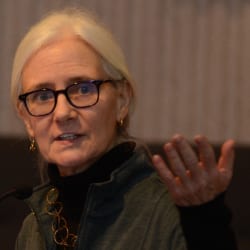 Diane Brentari is the Mary K. Werkman Professor of Linguistics, the Director of the Sign Language Linguistics Laboratory, and a Director of the Center for Gesture, Sign and Language at the University of Chicago. Brentari's foundational work over the course of her career on the structures that occur in the sign languages of deaf communities has guided her recent investigations of language emergence. Brentari's scholarship has addressed issues in sign language grammars, particularly problems at the intersection of phonology, morphology, and prosody. Her work has focused on understanding the extent to which the modality of a language—auditory, visual, or tactile—has an effect on the structure of language, on variation among languages, and on the flexibility of the human language capacity. She has published and edited four books and over 100 articles or book chapters on these themes. During the period of her Guggenheim fellowship, Brentari's project, Observing the Creation of Language, will investigate very young (emerging) languages in order to better understand the linguistic, cultural, and cognitive bases for the emergence of language in historical time. Her work will involve cases of language emergence in young sign languages and in the protactile language used in some DeafBlind communities. Photo Credit: The Chinese University of Hong Kong Audio-Visual Services Unit