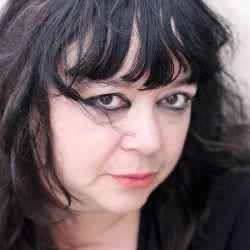 Diane Seuss is the author of five collections of poetry, most recently, Still Life with Two Dead Peacocks and a Girl (Graywolf Press, 2018), a finalist for the National Book Critics Circle Award and the Los Angeles Times Poetry Prize. Wolf Lake, White Gown Blown Open (University of Massachusetts Press, 2010) received the Juniper Prize. Four-Legged Girl (Graywolf Press, 2015) was a finalist for the Pulitzer Prize. frank: sonnets, will be released from Graywolf Press in 2021. Seuss' poems have appeared in Best American Poetry as well as a range of literary magazines, including Poetry, Gulf Coast, and The New Yorker. Seuss was raised with her sister in rural Michigan by a single mother. Her work has sought to bring nuance to rural spaces, to tease out the large themes of “high art” as they intersect with “low culture,” the domestic realm, and small places. She has written in the mode of the female picaresque about notions of beauty, the body, addiction, and love. Seuss was Writer in Residence at Kalamazoo College. She has been a visiting professor at Colorado College, the Helen Zell Writers' Program at the University of Michigan, and Washington University in St. Louis. The Rumpus Interview Poets & Writers Q and A   Photo Credit: Gabe Montesanti