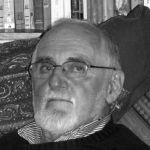 I began studying Spanish at Ann Arbor High School in 1945.  Spanish was my major when I took the A.B. degree at the University of Michigan in 1951.  After two years in the U.S. Army, I returned to Ann Arbor to complete the M.A. in Spanish in 1954 and the Ph.D. in Spanish in 1961.  I believe that I studied with exceptionally gifted teachers at Michigan, prominent among them Irving A. Leonard and Enrique Anderson Imbert.  My doctoral dissertation was written under the direction of the latter and dealt with “The Argentine Detective Story.”

In one of Anderson Imbert’s courses in 1954 I began reading the stories of Jorge Luis Borges.  I was struck by the brilliance and originality of his style, and, having published stories, poetry, and essays myself, I believed I might have some success in translating Borges into English.  I wrote to him and received full authorization to translate any of his writings that I deemed worthy.  Together with another Michigan graduate student, James E. Irby, who was then writing his dissertation on Borges, I prepared the manuscript of a book that after many rejections was accepted and published by New Directions in 1962—Labyrinths: Selected Writings of Jorge Luis Borges, which was the first collection of Borges’s work to appear in English. (My belief in Borges’s importance was unshakable, but no “commerical” publisher forty years ago could be persuaded to take a chance on an unknown Argentine writer.  Only the late James McLaughlin, who spent his entire career “discovering” writers deserving of translation and publication in English was willing—even to some degree eager—to add Borges to the New Directions list.  I’m glad he did: the book has been very successful.)

Shortly after the appearance of Labyrinths, I went to Argentina for the first time, met Borges, and began a friendship with him that lasted for many years.  Since 1962, I have made more than a dozen trips to Buenos Aires.  During this period, I spent a total of two-and-a-half years there as a Fulbright Visiting Lecturer in American Literature (1964-65, 1967-68, 1970). I taught, in Spanish and in English, at the University of Buenos Aires, John F. Kennedy University, the Profesorado Secundario, Lenguas vivas, and the University of La Plata.  I lectured on subjects related to American literature throughout Argentina and also in Peru, Chile, and Uruguay, usually under the auspices of the Fulbright program.

Living for long periods in Argentina, I learned much about that country’s history and culture and gained an insight into what makes the “poeteño” tick.  I have written and lectured extensively about Argentina and the Argentines.  One instance would be the “Argentine Letter” that I wrote in 1965 at the request of the New York Times Book Review (January 31). Over the years I have reviewed translations of Spanish American literature for many publications, among them Saturday Review, New York Times Book Review, Washington Post, San Francisco Chronicle, and also for many magazines.  During the decade of the 60s, I served as General Editor of the Macmillan Modern Spanish American Literature Series, which included eight Spanish American literary works, prepared as college-level reading texts.  Four of these were by Argentine authors: Anderson Imbert, Sábato, Marco Denevi, and Cossa.  The last two I did myself.

In the years before the Borges book was completed, I was also translating and publishing detective short stories by Spanish American writers.  These efforts eventually led to the publication in 1972 of an anthology titled Latin Blood: The Best Crime Stories of Spanish America. It is to date the only anthology of Spanish American detective fiction.  Given my interests, it is a book that I am inordinately proud of.

Since the 1962 publication of the Borges collection, I have translated the work of many Argentine writers, whose writing I had come to know during my stays in Buenos Aires.  These included novels (Namuel Peyrou,  Denevi, and Adolfo Bioy Casares) and short fiction (Borges, Casares, Peyrou, Denevi, Rodolfo Jorge Walsh, Imbert, Aisemberg, among many others). Prior to my first trip to Argentina in 1962, I corresponded with these authors and then, during the first year in Buenos Aires as a Fulbright Research Scholar, I began personal friendships with all of them.  (I have rarely translated anything by an author whom I have not known personally.)

In 2000, I received an NEA translation grant to bring into English the writings of the Argentine author Edgar Brau, a prodigiously gifted and up until then virtually unknown writer, even in his own country.  In 2006, Michigan State University Press published Casablanca and Other Stories by Edgar Brau, a collection of ten narratives, of which I translated eight, all of which had previously appeared in U.S. literary magazines.  This book was one of the four finalists for the PEN Club 2007 award in the category of translation.

In 2008 the London Society of Authors selected Labyrinths as one of the fifty outstanding translations from the last fifty years. In December 2008, I traveled to Buenos Aires, where the City of Buenos Aires awarded me the title of “Visitante Ilustre” and the Argentine Academy of Letters held a special session to honor me for a half-century of translating into English and seeing into print the novels and short stories of many Argentine authors.