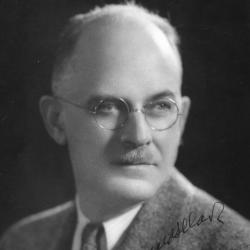 CLARK, DONALD LEMEN.  Appointed for studies of the influences of classical and post-classical rhetoric on John Milton’s theory and practice of prose and poetry; tenure, twelve months, from June 1 to October 1, 1944 and from February 1 to October 1, 1945.