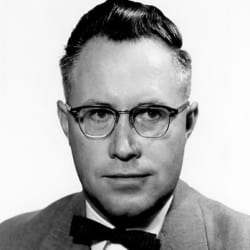 Donald T. Sawyer received his B.S. degree in 1953 and his Ph.D. in 1956, both from UCLA in the field of Chemistry. On receiving his Ph.D., he began his thirty-year tenure at the University of California, Riverside. During his thirty-year tenure there, he not only taught and conducted research but also served as Chairman of the Department from 1966 to 1970, and as Dean of the College of Physical Sciences from 1970 to 1974; he is currently Professor Emeritus there.

After officially retiring from UCR in 1986, Mr. Sawyer has held a number of other academic positions. In July 1985 he was appointed to the faculty of Texas A&M University, as Distinguished Professor. He served as Head of the Chemistry Department there (1985-86) and as Associate Director of its Institute of Biosciences and Technology (1986-87). In 1996, he was named Distinguished Professor Emeritus of Chemistry and Adjunct Professor in the Institute of Biosciences and Technology. He is also an Adjunct Professor in the chemistry departments of both Rice University and the University of Kentucky. During the past three decades some forty-five Ph.D. candidates and thirty-eight postdoctoral associates have studied with Professor Sawyer.

Professor Sawyer is the author of 309 research publications in the areas of oxygen chemistry, bioinorganic chemistry, redox chemistry and activation of dioxygen, transition-metal coordination chemistry, electrochemistry, and gas chromatography. He also is the co-author of ten books: Electrochemistry for Chemists, The Activation of Dioxygen and Homogenous Catalytic Oxidation, Oxygen Chemistry, Oxygen Complexes and Oxygen Activation by Transition Metals, Industrial Environmental Chemistry: Waste Minimization in Industrial Processes and Remediation of Hazardous Waste, Chemical Experiments for Instrumental Methods, Experimental Electrochemistry for Chemists, Electrochemical Studies of Biological Systems, Quantitative Analysis, and Experiments for Instrumental Methods, and is a member of the American Chemical Society and the American Association for the Advancement of Science. He was Chairman of the 1971 Gordon Research Conference on Analytical Chemistry, has served on advisory panels for NSF, NIH, and the Research Corporation, and was Science Advisor to the Los Angeles District of the U.S. Food and Drug Administration from 1975 to 1982. He has been a member of the Editorial Advisory Boards for Analytical Chemistry and Inorganic Chemistry.

Over the years, Donald Sawyer has garnered many honors. In addition to his Guggenheim Fellowship, which enabled him to study at the University of Cambridge, he was appointed a Visiting Research Fellow at Merton College in Oxford, England, in 1970; held a fellowship from the Japan Society for the promotion of Science in 1983; was elected a Fellow of the American Association for the Advancement of Science; received Special Citation by the Commissioner of the Food and Drug Administration; was awarded the Richard C. Tolman Medal by the Southern California Section of the American Chemical Society; and was selected as Faculty Research Lecturer for the University of California, Riverside, as Henry Werner Lecturer (University of Kansas), and as Distinguished Visiting Lecturer at the 12th National Meeting of the Chilean Chemical Society. During the past thirty-five years he has served as a National Tour Speaker for the American Chemical Society on thirteen occasions.

In 1997 he moved to Oregon for retirement on the West Coast with a continuing interest in oxygen chemistry. As of October 2000 his retirement venue has shifted to Kentucky. Now he and his wife, Shirley, live with their son in Princeton, New Jersey.