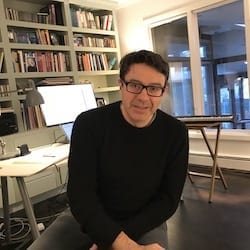 Donnacha Dennehy started scribbling down musical ideas around the age of ten, possibly inspired by the way his dad would come home after a day at work to try his hand at radio plays. His fascination with the way time and light stretch and contract through the year in his native Ireland, and the volatile psychological impact of such phenomena, has an impact on the structure and overtone-influenced harmony of his music generally. He studied composition at the University of Illinois and returned to live in the States full-time in 2014. He is now a professor at Princeton University. In recent years, he has concentrated on large idiosyncratic pieces - like Tessellatum for Nadia Sirota, Liam Byrne and microtonal viol consort - and musico-theatrical pieces such as his docu-cantata, The Hunger, for Alarm Will Sound, and his operas with the writer Enda Walsh. He continues to maintain a close connection with the group he founded, Crash Ensemble, and they feature in his opera, The Second Violinist, which won the 2017 Fedora Prize. Portrait albums of his music have been released by Nonesuch, New Amsterdam, Cantaloupe, NMC and Bedroom Community. His music is published by G. Schirmer, New York.